A GPS Receiver is a device that provides its geographic position (Latitude, Longitude, and Altitude) information with the help of satellite navigation systems. Depending on the sensitivity of the receiver device and a few other factors, precision of the location data provided by a GPS receiver might vary from sub centimeter to several meters.

An RTK (Real time kinematic) System is designed to collect précised (sub centimetre) position (Latitude, Longitude, and Altitude) data. It consists of two components; a base and a rover. In general, the base is set at a known position, and the rover is used to measure the Latitude, Longitude, and Altitude of nearby unknown positions. The base is connected with the rover via Bluetooth/wireless. The way the system works is that the base communicates with the satellites and estimates corrections for its position and then send it to the rover. The rover also communicates with the satellites and calculates its position and then correct it with the correction data received from the base (Figure 1). 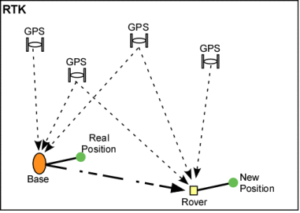 However, while working in the wilderness, it might not be possible to find a known position where the base can be set. In that case, base can be set at an unknown location and later post-processing (Precise Point Positioning PPP) can be performed to estimate and apply corrections. To be able to get précised correction estimates using PPP, base should be left at a given location running for at least two hours. There are a number of freely available and easy to use software for PPK (example: https://webapp.geod.nrcan.gc.ca/geod/tools-outils/ppp.php?locale=en).

It is to be noted that the base and rover must be within a certain distance (usually 200-300 m) to ensure good communication between them. In addition, this communication works best while they are within the visible line of sight. However, while surveying in deep forest or in mountainous regions, it is extremely difficult to meet either of these conditions. A Repeater, an amplification system that contains active and/or passive antennas, might be very useful in such case. It simply amplifies the base signal so that receiver can communicate with the base from far (1-2 Km).

BWRAP lab intend to use Hemisphere E600 RTK package for recording position information. A brief description of the RTK can be found here.

The BWRAP generally intent to pursue Precise Point Positioning (PPP) Surveys as it might be impossible to find a known position for the base in the wilderness. In PPP survey raw data is collected in the field and local (corrected) coordinates are determined through post processing. However, where possible (e.g., in company leases), we will use existing-control surveys, which deliver ground coordinates in real-time. However, these require tie-in to Alberta Survey Control Markers (ACSMs), which may not be found within range of a given field site. Under conditions where ASCMs are not available, we will move to PPP surveys. In all cases, our goal is to transform GPS coordinates into local coordinates that are accurate in the ~1-10cm range.

The main difference between a mapping-grade survey – one with absolute accuracies in the ~1-10m range – and a survey-grade survey – those with accuracies in the ~1-10cm range – is the correction for local atmospheric and multipath errors. Since these factors vary spatially, they are best measured by a base station sitting in a stationary position in an existing-control survey, the base station is set up on or near an existing control point with accurately known local coordinates. In this manner, GPS coordinates can be translated into local coordinates in real time (Figure 2).

Accurate existing-control surveys require the operator to set the proper reference system, assemble and configure the GNSS system correctly, tie into one or more high-quality survey monuments, and establish reliable communication between the base station and rover(s). Some of the key considerations include:

It is also good practice to record raw observations in the base station and post-process these data through PPP-survey techniques. This provides both a verification method and a backup for the existing-control survey.

There is a network of nearly 30,000 ASCM monuments throughout Alberta, each identified by a brass tablet and often accompanied by a nearby peg or pole (Figure 3). ASCM ID cards contain information in individual ASCMs and are available for free through the Government of Alberta Spatial Information System (SPIN) web site. ID cards should be downloaded prior to surveying and used to locate ACSMs in the field.

When working in a remote area far-removed from ASCM control points, Precise Point Positioning (PPP) surveys provide an alternative means of translating GPS coordinates to local coordinates, through the use of precise satellite orbit ephemerides. The process involves storing raw observations on the base station and submitting them to the CSRS-PPP tool after the fact (Figure 4). 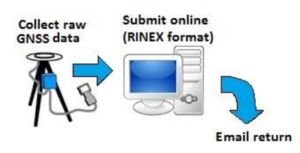 Accuracies of PPP surveys are subject to many of the same factors affecting existing-control surveys. However, other issues are also at play: the most important being the length of time over which raw observations are recorded. 1-2 hours of uninterrupted GNSS observations can achieve <10cm accuracy and is deemed suitable for this protocol. Greater accuracies (<5cm) can be achieved with 2-4 hours of GNNS observations. 12-24 hours of observations are required to achieve the cm-level accuracy.

An existing-control survey involves operating the base station on or near an existing ACSM control point. While you need not be situated directly on top of a marker to work in this manner, your survey must be tied in so that GPS coordinates can be translated to local coordinates in real time. Note that even though we expect to record accurate local coordinates in an existing-control survey, it is also good practice to have an SD card in place in the base station so that raw data can also be collected as backup.