Up to 60% of the natural landscape of northeastern Alberta and 64% of the oil sands surface mineable area is dominated by a mosaic of wetlands and peatlands, reflecting hydrology, topography and successional processes operating since the last glaciation. Documenting the success of reclamation of wetland landscapes requires new scientific and technical expertise, which will be enabled by the proposed IRC. Presently, there are no accepted methods of assessing wetland construction effectiveness or ‘functionality’ of a reclamation target. However, several attributes are recognized as either modulators or indicators of a wetland’s successional state or its environmental or biological condition. The Scope of Work (SOW) of this project is to measure a suites of environmental and biological characteristics of newly-formed and maturing wetlands and their surroundings to document the range of natural variation. These ranges will form the basis of comparison against which to assess the ‘success’ of constructed wetlands in the post-mining landscape. The following wetland features are recognized as being important measures of ecological condition:

Time to Recovery: Recovery rates of restored or reclaimed wetlands vary primarily with respect to wetland size (Moreno-Mateus 2012). In a meta-analysis of 621 wetland sites, hydrological features become similar to reference values and vertebrate and macroinvertebrate species recolonize within 5-10 y. In contrast, biological structure and biogeochemical processes had not fully recovered after 50 y. Further, the rate of recovery was strongly related to wetland area: biological structure in wetlands ≥100 ha become similar to reference wetlands within 5 y of reclamation. Perhaps counterintuitively, created (reclaimed) wetlands became similar to reference wetlands much more quickly than restored wetlands.

Water quality Influences: Water quality constrains the abundance and composition of wetland biota. Most undisturbed wetlands in the AOS have low conductivity, but natural seeps increase salinity and result in halophilic communities. Wetlands forming in sodic overburden storage areas on oil sands leases are also saline enough to limit community composition. Biota may tolerate higher salinity from natural or runoff sources than from tailings waters, possibly due to interactions of the latter with naphthenic acids and other residual bitumen-extraction byproducts.

Landscape and Microtopography Influences: Wetland persistence depends on providing and maintaining an adequate water supply. Evapotranspiration often exceeds precipitation in the AOS, emphasizing the need to trap and store water during wet events. Constructed wetlands have been hypothesized to need at least a 2:1 ratio of watershed: wetted area for precipitation to sustain fen habitat in the AOS. Land disturbance (altered forest cover, soil or drainage pattern) is also a key stressor. For example, roads and culverts alter both hydrology and habitat use by biota. Wetland geometry (e.g., slope; emergent zone width) influences abundance, richness, and distribution of aquatic communities.

Permanence: Marsh-like wetlands are a focus of AOS reclamation because they are persistent and relatively easy to construct. However, seeps and naturally-forming minerotrophic wetlands wet 10-17% of reclaimed areas and storage dumps (Little-Devito et al. 2019; Hawkes et al. 2020), leading to questions of the determinants of where ‘opportunistic’ wetlands occur and the extent to which they match prescriptions and predictions.

Overall Objective: Formulating a Reclamation Assessment Approach for oil sand reclaimed wetlands: Because reference locations in the RCA focus on ‘climax’, stable state or a mosaic of successional states, recovering or newly reclaimed areas require a different frame of reference. The proposed research will compile data from suites of wetlands at early time-points since their formation or creation. These data, essential as a frame of reference for assessing developing landscapes, will be collected and summarized to document the range of natural variation in indicator variables for natural and reclaimed wetlands. Such information will inform guidelines that will determine whether adaptive management may be needed to achieve closure outcomes (maximize the likelihood of a wetland becoming functional and ultimately exhibiting the ecological properties for which it was designed).

Over the course of the three-phase, 5-year program, up to 120 candidate wetlands (minerotrophic fens and marsh-like areas) approximately 3, 8, 20, 40 years post-formation, and ‘mature’ (age-indeterminate), will be assessed. Some of these age-states are similar to those used for assessing upland forest stands in Alberta and also broadly correspond to times since various demonstration projects were undertaken by COSIA partners. The BWRAP activities and key team members who will participate in fieldwork are summarized in Figure 1.

Figure 1. Organizational chart of IRC participants and their activities: Collaboration with the COSIA Land EPA Steering Committee partners and collaborating researchers is shown in green. Laboratory based personnel and activities are shaded or delineated in pink. Field-based activities and personnel are coloured brown (land/riparian sampling) or blue (open water sampling). Although direct links are not shown, the IRC Chair PI will directly supervise M.Sc and Ph.D. students.

Main Studies (2021-2024): Measuring environmental stress – biological response relationships among age-classes of young wetlands: Landscape, hydrological, water chemical, and biological features of selected young wetlands will be assessed over summers 2, 3 and 4 to generate additional observations on the range of natural variation of key parameters. Candidate wetlands to be sampled in phase 2 will be identified in year 1.

Data from suites of wetlands across the range of stress scores on the reference-degraded continuum are needed to calibrate estimates generated from the wetland inventory and additional predictive measures. We will assess condition of recently constructed/forming wetland areas relative to older marsh-like systems identified in the wetland inventory. Young systems in the Suncor lease area will include Suncor’s Wapisiw Lookout Marsh, the Nikanotee pond, and the developing Suncor compensation wetlands associated with the North & South Basemine Lake. Older systems will include shoreline marsh habitats at Crane Lake and other sites outside the Suncor lease areas. ‘Young’ natural systems will be wetlands forming through saturation/ ponding that develops as a consequence of access road construction through otherwise undisturbed landscapes. ‘Mature’ natural systems to be surveyed will be similar habitats at the margins of Ruth, Horseshoe and Shipyard lakes. Variation among these waterbodies’ characteristics will be used to define the range of successful reclamation outcomes anticipated in the AOS reclaimed landscape after a time period equivalent to reaching ‘maturity.’ Wetlands selected for fieldwork will be assigned to age classes (new – 3-6 y; young – 8-12 y; older 15-25 y; and maturing >40 y). Together, the PI and program PDFs in consultation with the COSIA partner liaison personnel will develop a field sampling design and identify the wetlands to be field-sampled over summers 2, 3, and 4 of the program (40 wetlands x 3 years =120 wetlands).

Ultimately, analyses of aerial photos and satellite images will determine wetland location and inferred age, size, and interannual variation in vegetation and open water distribution. However, in-place sampling and data-logging are needed to document processes and dynamics within individual wetlands. Data loggers will record diel and seasonal variation in water depth, conductivity, dissolved oxygen concentration, temperature, photoperiod and light intensity. Standard sampling protocols will be used to characterise water, sediment and biological characteristics (Table 1, below). The variables to be measured, and methods used are summarized in Table 2.

Wetland Assessment: Field sampling will be conducted by groups of students organized into teams as summarized in Figure 1 (bottom section). A postdoctoral researcher who has expertise in drone technology and operation will coordinate the teams’ activities and will also be responsible for conducting aerial surveys of each study wetland. Three fieldwork teams each will define a stress composite index and determine the associated biological responses. The M.Sc. student in each team will sample biota to be ultimately calibrated to stressor indices, providing biological indicators of wetland age-class specific condition. The Ph.D. student will derive methods of characterizing their composite stress index, documenting the index’s relationship with underlying drivers, and interpreting the evolving differences in the stressor’s expression as wetlands age.

A land/riparian sampling team will document topography, habitat heterogeneity, slope and aspect, and characteristics of emergent vegetation and wet meadow zones (Table 1). The members of this team will collect synoptic data that will contribute to defining the landscape/disturbance stressor (indicated in brown text of Fig. 1)

Table 2. Summary of the types of data and methods to be used in field studies to assess wetland condition relative to 3 types of environmental stress during field studies. References are provided for specialized approaches. 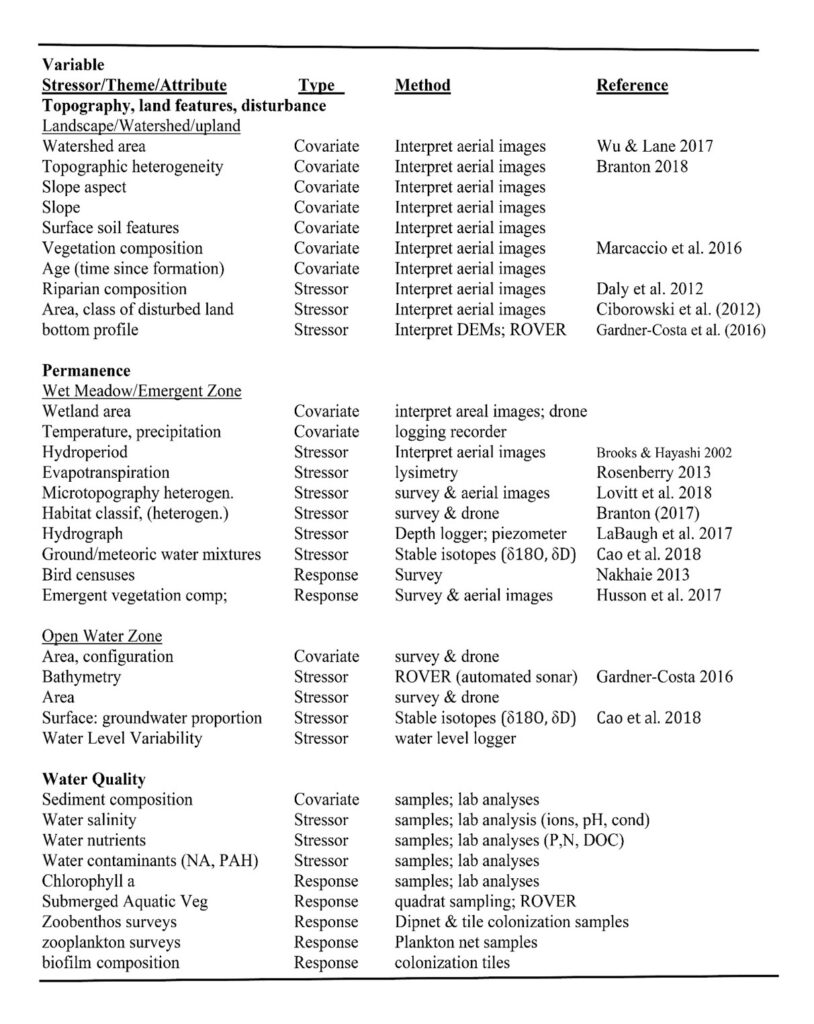